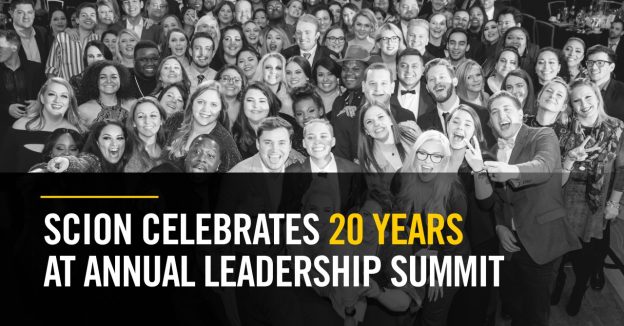 The Scion Group held its annual leadership summit January 7-9 at The Fairmont Hotel in Chicago. This event brought managers, executives and service providers together from across the country to celebrate Scion’s 20th anniversary, to focus on the company’s four perspectives, and to inspire continued leadership.

Events began with a celebration for managers from 58 Scion communities that achieved a 100% lease-up for the 2019-20 academic year. Team members arrived in style at this 1920s-themed casino night.

All attendees then participated in sessions and keynotes centered around the recently announced company perspectives: Have a bias for action; There are no half measures; Be a lifelong learner; and Always innovate.

Mitchell Smith, Chief Operating Officer, opened the conference with various department heads on a Perspectives Panel, where they shared experiences on how the company has grown and evolved over the years. Later that afternoon, Omar Johnson, former Chief Marketing Officer at Beats by Dre and former Vice President of Marketing at Apple, delivered a master class in innovation by sharing insights from his time at Nike, Apple and through his success and growth with the rise of the Beats by Dre brand.

On the second full day, Avi Lewittes and Jay Pearlman, Scion’s Chief Investment Officer and Senior Vice President of Advisory Services, respectively, discussed past successes and the forecast for company growth. Pearlman noted that 2019 was the busiest year yet for Scion’s Advisory Services team and anticipated that the launch of the firm’s Student Housing Knowledge Center will further establish its position as a thought leader in the sector. Lewittes reflected on Scion’s enormous acquisition volume since 2015 and offered a glimpse of what the future holds for the company’s ongoing growth. Later that morning, Lauren Merritt, Scion’s Director of Brand and Marketing, discussed how Scion’s brands have evolved beyond traditional marketing efforts and toward a company-wide focus on the customer experience.

Later that day, Julian Lute, Strategic Advisor at Great Place to Work and the event’s emcee, described what it means to be an organization that continuously learning, evolving and improving. The final keynote was provided by Brad Karsh, Chief Executive Officer at JB Training Solutions, whose infectious energy inspired attendees to use their bias for action by doing everything with purpose, having an unrelenting follow-through and learning from failures.

To close out the summit and celebrate the company’s first 20 years of business, Scion invited the more than 350 attendees to a celebratory dinner. Executive Vice President Eric Bronstein recognized team members for five years of service. In his remarks, Scion President Robert Bronstein reflected on the shared focus of all Scion team members as a primary reason for the company’s success and reiterated that Scion remains solely dedicated to the student housing sector. The company’s first-ever client from 2000, Holy Family College, was in attendance and received a $20,000 donation in honor of the faith it placed in Scion 20 years earlier. The evening concluded with an annual awards presentation to celebrate teams and individuals for their achievements and embodiment of the company’s perspectives.